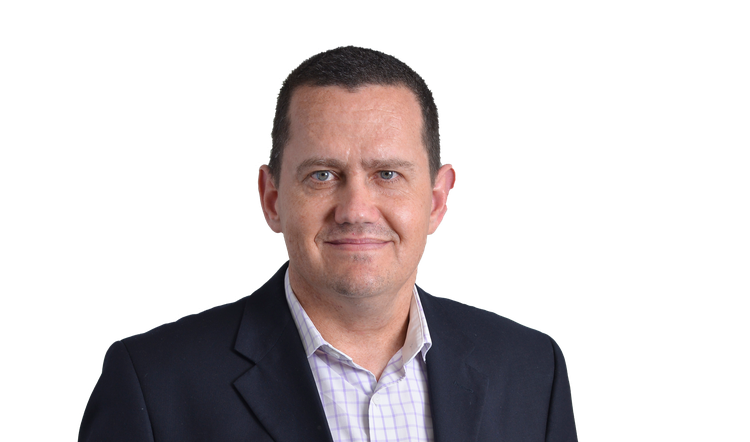 Private sector: ready to get behind SA government’s infrastructure programme

In a world in which the government and central bank have several means available to stimulate the economy, infrastructure spend is a powerful anti-recessionary fiscal policy tool.

In a world in which the government and central bank have several means available to stimulate the economy, infrastructure spend is a powerful anti-recessionary fiscal policy tool.

However, in South Africa economic growth has been constrained by lower levels of investment in infrastructure than in other developing economies, which has been exacerbated by specific issues such ageing infrastructure and infrastructure bottlenecks. The COVID-19 crisis and the fiscal support needed to alleviate the damage done to businesses and the most vulnerable citizens as a result of the lockdown could also put the government’s future infrastructure ambitions at risk.

The extent of infrastructure spending in an economy is reflected in the level of gross fixed capital formation (GFCF) as a percentage of Gross Domestic Product (GDP). The measure captures how much money as a proportion of total economic activity is being invested in capital goods, such as equipment, tools, transportation assets and electricity and various measurable outputs of these.

South Africa is investing too little to matter

South Africa’s reported GFCF has been historically low, with the exception of the build-up to the FIFA World Cup in 2010. Latest statistics show GFCF as a percentage of GDP was 18.19% in 2019, which is considered far too low for a developing economy. Several studies consider an acceptable norm to be in the region of 30% to 35% of GDP.

South Africa’s GFCF ratio also has some way to go before it will achieve the target in the government’s National Development Plan of 30% by 2030.

China is a prime example of how much infrastructure investment can boost an economy. Its economy is more than seven times larger than it was two decades ago. While China’s growth rate has slowed recently for a variety of reasons, other emerging markets, and the world average, are still much higher than South Africa’s. 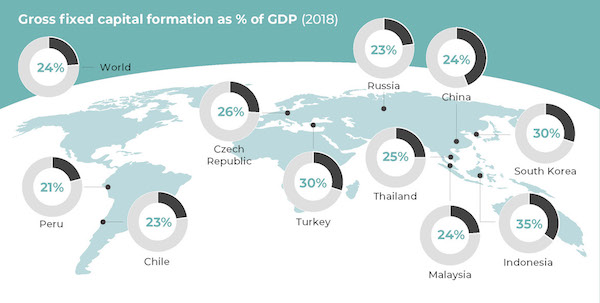 While assessing this, it is important to note that a country’s current debt level does have a bearing on its ability to fund infrastructure initiatives – and South Africa’s government debt burden doesn’t bode well for the country’s infrastructure funding capacity.

South Africa’s gross loan debt to GDP ratio is expected to exceed 90% over the next three years.

When you include guarantees to State-Owned Enterprises (SOEs), the government’s debt-to-GDP ratio is expected to rise to well above 100% compared to the average emerging market level of 45% of the countries included in the table above. A debt-to-GDP level more than twice as large as the average emerging market means that the South African government will have very little scope to fund large scale infrastructure and developmental initiatives and thus the burden will fall elsewhere.

Although there are historical reasons for this high debt-to-GDP burden, the government’s finances have also been stretched by the social and economic measures it has needed to put in place to alleviate the economic fallout from COVID-19. A fiscal rescue package of R500bn will add to the already high debt burden and economic lockdowns have already resulted in lower levels of revenue generation, putting the government in a difficult position fiscally.

If the environment is right, private investors are ready

Banks, as well institutional investors, are no strangers to fulfilling a funding role but have become more apprehensive about doing so, given the government’s governance, financial and operational SOE failures.

While the various developmental finance institutions (DBSA, IDC, Landbank, etc.) need to fulfil a specific role when it comes to industrial policy, economic development and providing credit-enhancing capital, capital market players need to have confidence that the policy environment will remain stable and that potential investments will offer sufficiently attractive risk-related returns.

To a great extent, the Renewable Energy Independent Power Producer Procurement Programme (REIPPPP) met these criteria, enabling the private sector to play an important role; committing about R200bn to the programme to date. REIPPPP is seen as an important success story, particularly in respect of the impressive implementation role that the Independent Power Producers Office played in that programme.

Futuregrowth played an active role, deploying over R8bn to date to 29 independent power producers through the various funding windows.

Unfortunately, the success of this programme has not been emulated in other sectors and there hasn’t been a co-ordinated approach to address the other necessary infrastructure investments until now.

That may change with the Investment and Infrastructure Office set up by President Cyril Ramaphosa. The government gauged private sector investment appetite recently when it presented various project pitches for various sectors deemed a priority to the broader market, as a precursor to the inaugural Sustainable Infrastructure Development Symposium of South Africa (SIDSSA). Sectors the government has identified as in need of infrastructure investment include energy, digital infrastructure, water and sanitation, human settlement, agriculture and transport.

The government’s latest engagement with the private sector is a step in the right direction. It crowds in potential private sector investors in a much more co-ordinated manner and includes them in assessing how these various initiatives can be funded.

Most of the projects are at various stages of feasibility and it is hoped that many of them will be sufficiently bankable to attract the necessary funding. It is encouraging that the government is engaging with capital market participants during the conceptual stage of some of these projects because it will allow concerns to be addressed earlier and thereby potentially ensure a much higher success rate.

Breaking out of SA’s low-growth trap

Although the range of projects is wide, there are several significant ones that could change the South African landscape to the benefit of all. From a digital perspective, infrastructure investment in broadband fibre connectivity could provide peri-urban (townships) and rural communities, which have been traditionally underserviced, with affordable access to broadband connectivity. Government facilities, such as schools, clinics and police stations would also benefit. The private sector is already playing a role in this space, with Community Investment Ventures Holdings (CIVH) rolling out affordable fibre to Mitchells Plain, on the Cape Flats in Cape Town, and more recently to Soweto, in Johannesburg.

More traditional investment in, for instance, transport infrastructure would facilitate trade and the transport of goods and services. The government’s focus will be on upgrading existing toll roads, bulk rail transport lines and harbours.

The N3 Toll Route remains the key corridor connecting the Durban harbour to Gauteng as the economic hub. The current Van Reenen’s Pass remains a challenge for heavy vehicle traffic, with the N3 De Beers bypass previously considered as a solution. We do, however, note that Sanral was instructed to halt the process and the project has not progressed since then.

The infrastructure initiatives under consideration could be important contributors to getting South Africa out of its current low-growth trap. Although the estimated R1.5trn needed to fund the projects over the next decade is a tall ask, the private sector is ready to fund them as long as they are well structured and managed, that investors are compensated for the risks that they are taking and that they ultimately have policy certainty.

Futuregrowth has been a longstanding institutional investment partner in infrastructure and developmental finance, funding projects for close on 24 years. It manages the largest debt fund of this nature in sub-Saharan Africa, the Futuregrowth Infrastructure and Development Bond Fund, which has a market value of more than R15bn. It has funded various transactions over the last two decades to the benefit of all South Africans – and will continue investing in projects that provide the impetus the domestic economy needs to lift its economic growth rate to sustainable levels in the future, while earning risk-adjusted returns.