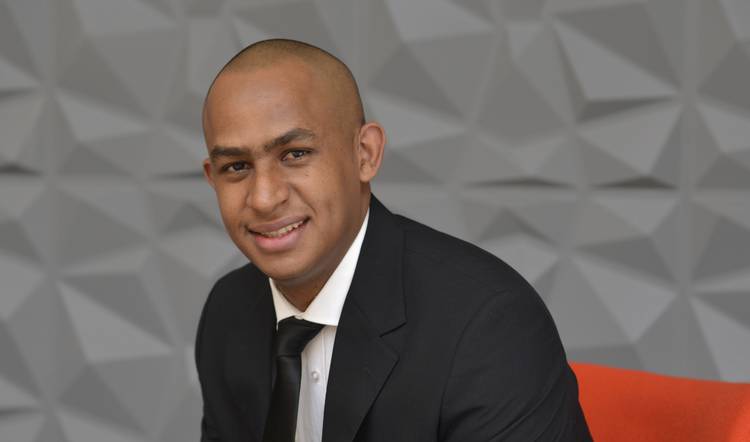 The interest rate risk of the All Bond Index has been systemically increasing over time. This is driven by persistently high fiscal deficits and the resultant issuance of longer term SA government debt. Many retirement fund investors use the All Bond Index (ALBI) as their benchmark for bond allocations. They should be conscious of the steadily rising volatility of bond returns and that such bond allocations are riskier than they have been historically. While the ALBI has been used as a proxy to match pension funds’ liabilities, the ALBI itself has probably grown more volatile than pensioner liabilities.

The interest rate risk of the All Bond Index has been systemically increasing over time. This is driven by persistently high fiscal deficits and the resultant issuance of longer term SA government debt. Many retirement fund investors use the All Bond Index (ALBI) as their benchmark for bond allocations. They should be conscious of the steadily rising volatility of bond returns and that such bond allocations are riskier than they have been historically. While the ALBI has been used as a proxy to match pension funds’ liabilities, the ALBI itself has probably grown more volatile than pensioner liabilities.

The South African listed bond market has come a long way since its initial formalisation. The then Bond Market Association (BMA) was granted an exchange license and subsequently renamed itself the Bond Exchange of South Africa (BESA), which later merged with the Johannesburg Stock Exchange (JSE). The All Bond index (ALBI), a product of the then BESA, was officially launched in July 2000. The ALBI is constituted of the top 20 largest and most liquid listed bonds in South Africa, and today accounts for approximately 60% of local issued debt.

Is exposure to the ALBI a good thing?

Having exposure to the index has had a positive impact on investor portfolios, given that returns on the index have historically been both stable and consistently positive. Since inception, the ALBI has had a cumulative nominal return of 523% (as at July 2018), which on an annualised basis, amounts to 10.7% per annum. In rand terms, a R100 invested in the index at inception would be worth R623 today. What really matters to us, however, is the inflation adjusted real return that an asset produces over time. It is the real return that increases an investor’s buying power and one has to ask whether R623 today could buy the same goods that R100 could have bought when the index was officially established. Using the actual annual average inflation rate for the period of 5.8%, an identical basket of goods that cost R100 in 2000 would cost R270 today. This implies that you would be able to buy just over two baskets with the R623 you would have held had you been invested in the index, thereby more than doubling your buying power.

Over time, in addition to the positive and stable real returns provided, the ALBI has offered investors a diversification benefit relative to other asset classes. However, the other side of the coin is that the index has also become inherently more risky, specifically in terms of interest rate risk.

What is interest rate risk and how do we measure it?

There are two primary risks that impact a bond’s value. The first of these is default risk. Whenever you lend out money by investing in bonds, there is a chance that the party you are lending to will be unable to pay you back. When this occurs, the bond is said to be in default and your best bet then would be to recover as much of your initial investment as you can. If one were to hold a bond to maturity and no default occurred, you would get your principal (i.e. your initial investment) back plus interest. The second risk applies to investors who decide to sell bonds before they mature: In doing so, they expose themselves to interest rate risk as changes to interest rates affect the market value of the bond.

Interest rate risk arises from the changes to an existing bond’s price as prevailing market interest rates move either up or down. When you buy a fixed-rate bond, the coupon is generally set at levels close to the prevailing market rate, and once the bond is bought the coupon rate remains fixed. However, if prior to maturity a similar bond (same term, and same default risk) were to be issued with a significantly higher coupon, then demand for the bond with the lower fixed coupon rate would drop, and with it the bond’s price. This helps explain why there is an inverse relationship between an existing bond’s price and prevailing market yields. The higher prevailing yields are relative to a bond’s fixed coupon, the less valuable those fixed coupons are, and, consequently, the lower the bond’s price.
The convention the market uses to measure interest rate risk is called modified duration. Modified duration approximates the change a bond’s capital price will have as a result of a 1% change in prevailing interest rates. For example, a bond with a modified duration of 7 would experience a 7% increase or decrease in its capital price if prevailing market yields were to decrease or increase by 1%.

What has happened to the ALBI over the past 10 years?

Post the Global Financial Crisis (GFC) in 2008, many emerging market economies, South Africa included, found themselves in the ill-fated position of having to stave off recession. Not only were central banks forced to cut interest rates, but governments were also inclined to increase expenditures. This meant running large budget deficits. Unlike many other countries, the South African economy has suffered persistent low growth in the post-GFC period, causing continued fiscal deficits. As a result, over the ensuing decade, South Africa doubled its level of gross loan debt from 26% of GDP to 55% of GDP.

Governments often need to mitigate redemption risk of debt by spreading maturities of their debt over time. As debt matures, borrowers need to ensure that capital is either paid back or that the outstanding loans are refinanced. As such, National Treasury embarked on a government bond switch programme, which entailed exchanging shorter dated bonds for bonds with longer maturities.
The combined impact of higher debt levels and the switch programme resulted in the percentage of longer dated bonds (i.e. bonds with a term to maturity of longer than 12 years) within the All Bond Index doubling from 30% at the end of 2008 to just over 60% in 2018.

Pitfalls of a market capitalisation-weighted index

One of the pitfalls of market capitalisation (market cap)-weighted bond indices such as the ALBI is that they are prone to ‘modified duration drift’*: the more debt that gets issued in a certain sector, the higher its weight within the index and the more the index becomes reflective of that sector. The doubling in the proportion of longer dated bonds within the index has caused the index’s average term to increase, which has resulted in the ALBI’s modified duration increasing quite significantly from an average of 5.1 in 2008 to an average of 7.4 in 2018 (Figure 1). 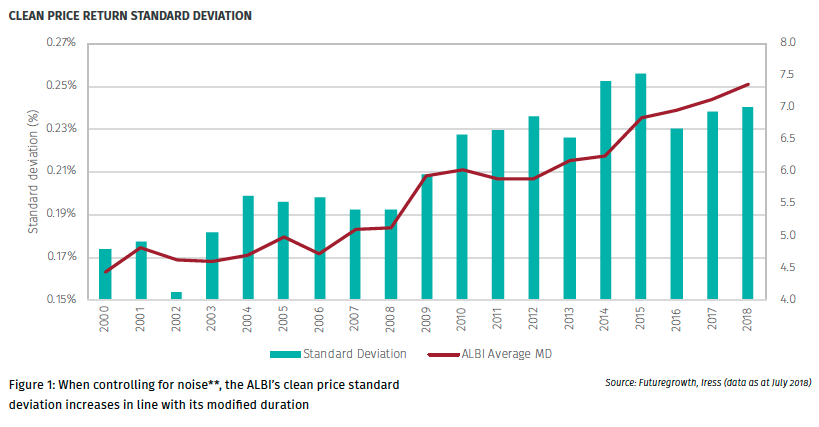 The ALBI is a good example of how these biases can manifest themselves due to the way the index has been constructed. The increased national funding requirement and the funding strategy accompanying it have not only caused the index’s maturity profile to lengthen and assume more interest rate risk, but the inherent credit risk has also risen. This is visible in the degradation of South Africa’s global credit ratings in the past several years, which have moved down in lock-step with the country’s rising debt load. It must be noted, however, that from the perspective of a Rand-based investor, the South African government is considered “credit risk free” – as the government itself is able to literally print rands to pay back debt if they must do so.

Nevertheless, simply put, not only has the index become inherently more sensitive to changes in prevailing interest rates, but its default risk is perceived to have risen too. In a nutshell, the ALBI of today is not the same as the ALBI when it was first launched.

All said, investors need to ascertain their tolerance for interest rate risk in the context of continuously changing benchmark risk characteristics. Given the pitfalls of market cap-weighted indices, as well as the macroeconomic uncertainty that South Africa and the rest of the world will inevitably have to navigate, it is critically important that investors continuously review their risk tolerance allowances around their existing benchmarks and ask whether these risk allowances still align to their existing investment goals.

*Futuregrowth has long-warned clients of the specific dangers of capitalisation-weighted bond indices which include credit risk: These indices end up overweight to issuers who borrow far too much capital! Broadly, we think the ALBI is a useable “risk-free” government bond index which can be reasonably utilised by funds for aligning to their fixed rate liabilities.

**We’ve achieved this by only considering yield movements within one standard deviation of the ALBI Index’s long term average yield.